The Geometer is a device to measure 3D orientation and is intended for areal surveys of whales and similar. It works with the PiAttitude software that runs on Windows PC computer. When the button on the Geometer is pressed the orientation is registered in PiAttitude. PiAttitude can serve several Geometers at the same time.

PiAttitude can also register GPS and sound information. When GPS is used, the current GPS information is registered along with the Geometer data as in the following image.

To increase the measurement robustness in case of a PC crash, PiAttitude register in the background all information from Geometers and GPS. At the end of a successful measurement session the combined data can be saved to a separate file along with comments. 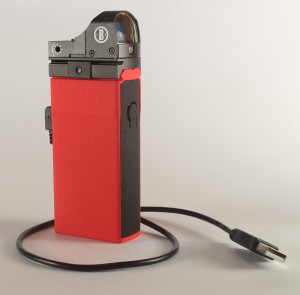 The figure shows the button to be pressed to mark an event. The top of the device is designed to accept a Trophy red dot  first strike sight from Bushnell for aiming. For less accurate applications, the built in slot can be used for aiming.

The main update from G1 to G2 regards the event button. G2 has a button that gives tactile feedback when the button is pressed. The user will not be in doubt if the button has been pressed or not. Also a light change positioned near the eye when aiming will tell the user that the event has been registered.

The Geometer connects to PC via USB cable. This is practical at low temperatures that are unfavorable for batteries. Future versions will also have Bluetooth connection. 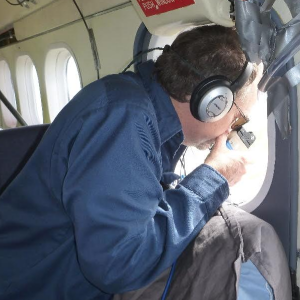 A Geometer with mounted sight in action

A system with G1, G2 and PiAttitude was tested in as survey in Iceland in July 2016. The survey was organized by Daniel Pike at NAMMCO. His comment after the survey was:

A system with G1’s and PiAttitude was tested in a narwhal survey in Greenland in August 2016 organized by Rikke Guldborg Hansen at the Greenland Institute of Natural Resources. Her comment after the survey was:

“First of I was really impressed with the precision of the Geometers. There was hardly ever more than 1-2 degrees differences in the angles between front and rear observer.

Also, you see the animals more clearly while taking the declination angle, because you do not have to focus on the numbers of the inclinometer, which usually meant that you had to close one eye.”