Our team flew an aerial survey for cetaceans around Newfoundland and Labrador in 2019,
using three observers split between two platforms on a DeHavilland Twin Otter aircraft. This is
the first year we have used Geometers, with extensive previous experience conducting large-
scale aerial surveys with handheld Suunto clinometers. Our observers used the Pi Geometers,
equipped with laser gunsights, and all connected by long USB cables to a single laptop that was
monitored by the flight leader/data recorder. 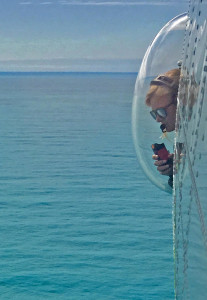 The Geometers were integrated with the new software, VisualSurveyor, for triggering each
sighting record, and the measurement of observation time, location, and declination angle. The
latter were collected when the sighting was abeam of the aircraft. The Geometers performed
well over the course of the survey and in combination with VisualSurveyor provided an efficient
and consistent means to collect real-time sightings data. Like other users, we noted no
calibration drift in the declination measurements over time, and measurements were
reproducible within about half a degree. In fact, during the mark-recapture effort there was rarely
more than 1-2 degree differences in the angles between front and rear observers!
The observers enjoyed using the Geometers and greatly preferred using them compared with
the analogue clinometers. VisualSurveyor included an option of changing the orientation of the
devices so they could be used vertically or horizontally which was useful in the bubble windows,
or to accommodate personal preference.
We noted the following advantages of the geometer over analogue inclinometers:
1. Little chance of observer error in reading or transcribing the declination measurement. No
chance of “rounding” clinometer readings by observers;
2. More accurate time stamps on all observations;
3. Faster to use in areas of high-density sightings. The observer simply sights the red “dot”
on each group and presses the button – VisualSurveyor easily kept up with this data input;
4. The observer can use both eyes to make the sighting, allowing better observation effort to
be maintained. With analogue inclinometers, the sighting can only be seen with one eye
when using the instrument;
5. Data are recorded into a file that is easily incorporated into a data entry template, saving
transcription time (or in our case the underlying database of the VisualSurveyor
programme). 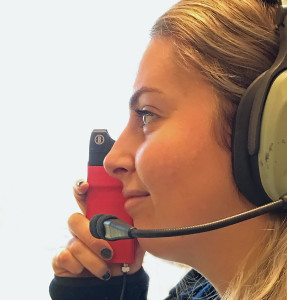 When the Geometers can also produce yaw measurements, the observers could collect sighting
angles anywhere in the viewing field, rather than just abeam, which would be a real advantage.
For instance, VisualSurveyor could then calculate exact positions and distances based on
altitude and the two declination and yaw measurements.
In summary, our experience with using the Pi Geometers has been very positive. In my opinion
the geometer increases the ease and accuracy of collecting sightings data. In conjunction with
the new VisualSurveyor software, we will use the Geometers on all of our future aerial surveys.
November 15 th 2019
Dr. Jack Lawson, Research Scientist
Fisheries and Oceans Canada