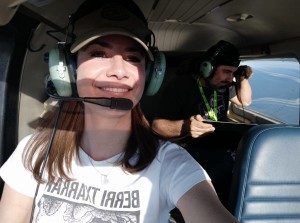 Thanks to the collaboration of Baldur Thorgilsson (Pi Technology, Reykjavik-Iceland) and Javier Hevia (Grup Air-Med, Tarragona-Spain) ALNILAM was able to test the geometer, a new device developed by Pi Technology company to get the declination angle in aerial surveys. On 19th February Jose Antonio Vazquez (Alnilam researcher) and Zuriñe Alberdi (GAM pilot) carried out a short flight where the functioning of the geometer was tested. In general, the test was successful and ALNILAM is very interested in the last improvements that will be develop in the near future.